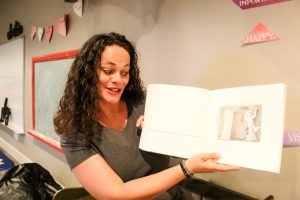 A unique confidence-building atmosphere.  Where a combination of outdoor learning and classroom play teach children the foundations of social and emotional skills.  The Learning environment teaches a variety of important concepts and skills and prepares children for life ahead of them. -Stephanie Bell parents input

Preschool focused on whole-child learning Where a combination of classroom and outdoor learning and play teaches children important concepts and skills that prepare children for life ahead of them.

“Building bodies so the mind can learn”  create q canva

These two propositions — both of them indisputable and important — have been offered many times.[1] The second one in particular reflects the “cult of rigor” at the center of corporate-style school reform. Its devastating impact can be mapped horizontally (with test preparation displacing more valuable activities at every age level) as well as vertically (with pressures being pushed down to the youngest grades, resulting in developmentally inappropriate instruction). The typical American kindergarten now resembles a really bad first-grade classroom. Even preschool teachers are told to sacrifice opportunities for imaginative play in favor of drilling young children until they master a defined set of skills.

As with anything that needs to be said — and isn’t being heard by the people in power — there’s a temptation to keep saying it. But because we’ve been reminded so often of those two basic contentions about play, I’d like to offer five other propositions on the subject that seem less obvious, or at least less frequently discussed.

1. “Play” is being sneakily redefined. Whenever an educational concept begins to attract favorable attention, its name will soon be invoked by people (or institutions) even when what they’re doing represents a diluted, if not thoroughly distorted, version of the original idea. Much that has been billed as “progressive,” “authentic,” “balanced,” “developmental,” “student-centered,” “hands on,” “differentiated,” or “discovery based” turns out to be discouragingly traditional. So it is with play: “Most of the activities set up in ‘choice time’ or ‘center time’ [in early-childhood classrooms] and described as play by some teachers, are in fact teacher-directed and involve little or no free play, imagination, or creativity,” as the Alliance for Childhood’s Ed Miller put it.[2] Thus, the frequency with which people still talk about play shouldn’t lead us to conclude that all is well.

2. Younger and older children ought to have the chance to play together. Peter Gray, a psychologist at Boston College, points out that older kids are uniquely able to provide support — often referred to as “scaffolding” — for younger kids in mixed-age play. The older children may perform this role even better than adults because they’re closer in age to the younger kids and also because they don’t “see themselves as responsible for the younger children’s long-term education [and therefore] typically don’t provide more information or boosts than the younger ones need. They don’t become boring or condescending.”[3]

3. Play isn’t just for children. The idea of play is closely related to imagination, inventiveness, and that state of deep absorption that Mihaly Csikszentmihalyi dubbed “flow.” Read virtually any account of creativity, in the humanities or the sciences, and you’ll find mentions of the relevance of daydreaming, fooling around with possibilities, looking at one thing and seeing another, embracing the joy of pure discovery, asking “What if….?” The argument here isn’t just that we need to let little kids play so they’ll be creative when they’re older, but that play, or something quite close to it, should be part of a teenager’s or adult’s life, too.[4]

4. The point of play is that it has no point. I didn’t know whether to laugh or shudder when I read this sentence in a national magazine: “Kids need careful adult guidance and instruction before they are able to play in a productive way.”[5] But I will admit that I, too, sometimes catch myself trying to justify play in terms of its usefulness.

The problem is that to insist on its benefits risks violating the spirit, if not the very meaning, of play. In his classic work on the subject, Homo Ludens, the Dutch historian Johan Huizinga described play as “a free activity standing quite consciously outside ordinary life as being ‘not serious’ but at the same absorbing the player intensely and utterly.” One plays because it’s fun to do so, not because of any instrumental advantage it may yield. The point isn’t to perform well or to master a skill, even though those things might end up happening. In G. K. Chesterton’s delightfully subversive aphorism, “If a thing is worth doing at all, it’s worth doing badly.”

Play, then, is about process, not product. It has no goal other than itself. And among the external goals that are inconsistent with play is a deliberate effort to do something better or faster than someone else. If you’re keeping score — in fact, if you’re competing at all — then what you’re doing isn’t play.

Implicit in all of this is something that John Dewey pointed out: “’Play’ denotes the psychological attitude of the child, not…anything which the child externally does.” As is so often the case, focusing on someone’s behavior, that which can be seen and measured, tells us very little. It’s people’s goals (or, in this case, lack of goals), their perspectives and experiences of the situation, that matter. Thus, Dewey continues, “any given or prescribed system” or activities for promoting play should be viewed skeptically lest these be inconsistent with the whole idea.[6]

Such is the context for understanding well-meaning folks (like me) whose lamentations about diminishing opportunities for play tend to include a defensive list of its practical benefits. Play is “children’s work”! Play teaches academic skills, advances language development, promotes perspective taking, conflict resolution, the capacity for planning, and so on. To drive the point home, Deborah Meier wryly suggested that we stop using the word play altogether and declare that children need time for “self-initiated cognitive activity.”

But what if we had reason to doubt some or all of these advantages? What if, as a couple of researchers have indeed suggested, empirical claims about what children derive from play — at least in terms of academic benefits — turned out to be overstated?[7] Would we then conclude that children shouldn’t be able to play, or should have less time to do so? Or would we insist that play is intrinsically valuable, that it’s not only defined by the absence of external goals for those who do it but that it doesn’t need external benefits in order for children to have the opportunity to do it? Anyone who endorses that position would want to be very careful about defending play based on its alleged payoffs, just as we’d back off from other bargains with the devil, such as arguing that teaching music to children improves their proficiency at math, or that a given progressive innovation raises test scores.

5. Play isn’t the only alternative to “work.” I’ve never been comfortable using the word work to describe the process by which children make sense of ideas — which is to say, adopting a metaphor derived from what adults do in factories and offices to earn money. To express this concern, however, isn’t tantamount to saying that students should spend all day in school playing. Work and play don’t exhaust the available options. There’s also learning, whose primary purpose is neither play-like enjoyment (although it can be deeply satisfying) nor work-like completion of products (although it can involve intense effort and concentration). It’s not necessary to work in order to experience challenge or excellence, and it’s not necessary to play in order to experience pleasure.

But there’s still a need for pure play. And that need isn’t being met.

This essay is adapted from remarks delivered at the Coalition of Essential Schools Fall Forum in Providence, RI, on November 12, 2011.

1. See the work of the Alliance for Childhood, statements by the National Association for the Education of Young Children, and such recent books as Deborah Meier et al.’s Playing for Keeps, Dorothy Singer et al.’s Play = Learning, Vivian Gussin Paley’s A Child’s Work, and David Elkind’s The Power of Play.

2. Miller is quoted in Linda Jacobson, “Children’s Lack of Playtime Seen as Troubling Health, School Issue,” Education Week, December 3, 2008. A few years later, Elizabeth Graue, a professor of early childhood education at the University of Wisconsin, made exactly the same point: “What counts as play in many classrooms are highly controlled centers that focus on particular content labeled as ‘choice’ but that are really directed at capturing a specific content-based learning experience, such as number bingo or retelling a story exactly as the teacher told it on a flannel board” (“Are We Paving Paradise?”, Educational Leadership, April 2011, p. 15).

4. One of many resources on this topic: the National Institute for Play, founded by Dr. Stuart Brown. Also, if you ever have the opportunity to see Saul Bass’s short documentary film Why Man Creates (1968), don’t miss it.

7. For example, see the reference to work by Peter K. Smith and Angeline Lillard in Tom Bartlett, “The Case for Play,” The Chronicle of Higher Education, February 20, 2011.